A Battle of Natives 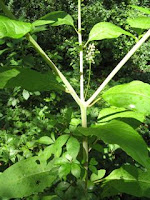 I endeavor to keep a woodland clearing free of invasive plants hoping to build a pond in this partly sunny area. Gone are the multiflora rose, English ivy, and oriental bittersweet, although the wisteria vines are still persistent. In their place there is pokeweed (Phytolacca americana), Virginia creeper (Parthenocissus quinquefolia) and young sassafras trees (they grow so fast!). This time of year when the pokeweed towers above me I am goaded into action with fork and shovel to dig up its thick taproots before the flowers ripen to berries and spread the plant even more. I actually love this plant in the fall with its vivid pink stems and dark blue berries, which feed migrating birds. I let it go in other areas but here I need to keep it under control or it will be impossible to dig for the pond. It seems that when land is cleared of invasive plants the natives take over with exuberance. Virginia creeper is providing a thick ground cover and will even climb up the pokeweed. Nearby is broadleaf enchanter’s nightshade (Circaea lutetiana), which is another tall native perennial weed that forms dense cover. On the underside of its leaf, amongst the white fluff of woolly aphids, I came across a strange looking insect I have never seen before. The case bearer leaf beetle (Neochlamisus sp.), a larva in this instance, covers its body with its own fecal matter and it appears as a large blob of insect frass on stumpy legs.

To herald in the season of chirping crickets, strident katydids and buzzing cicadas, I found a cicada resting on a mother in law’s tongue plant (Sansevieria) that is “vacationing” on my front porch. This was a good chance to get up close and personal with an insect I usually only hear as its sings way up in the tall trees on a hot summer afternoon. This was a fresh unblemished specimen, with huge brown eyes and margins of emerald green on its wings matching the plant’s stiff leaves, from which also dangled the dried brown case of its previous skin. Houseplants can be habitat too.
Posted by Sue at 11:52 AM 2 comments: