This fall I’ve been enjoying the migrant birds in my garden. The sparrows (white-throated and song) are back and so are the yellow-rumped warblers.  Flocks of golden-crowned kinglets perch on branches and flower stalks to glean tiny insects.  They seem fearless and allow me to get quite close to them.  One day I was thrilled to observe a group of northern parulas bathing in the pond.  Amongst them was a further surprise - a lone Canada warbler identified by a dark grey necklace on its bright yellow breast.  Late-flowering plants, seed heads and berries are plentiful in my garden to feed these visitors.  However, I was alerted to a hazard for these birds when I kept on hearing the sound of dull thuds against my picture windows, from which I have beautiful view of surrounding trees looking resplendent in fall color.  But reflections of this canopy in the glass were proving to be deadly. 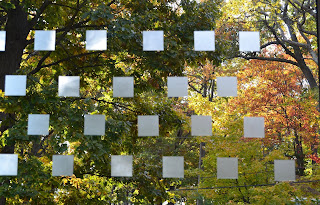 So I used some specially designed bird tape from the American Bird Conservancy to prevent further collisions.  Now my windows have arrays of 3” squares of opaque tape. There is still a view from within, the birds can sense there is no way through and this arrangement is proving to be quite decorative. The squares sometimes shimmer with shadows and light. 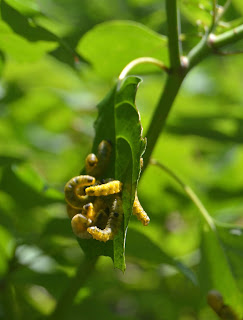 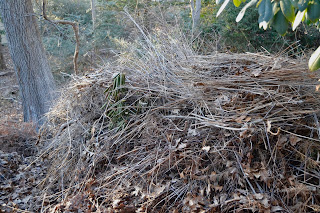 I spent this beautifully bright and warm spring day clipping and raking the meadow. There are now plenty of dried stalks, seed heads, straw and leaf litter to add to the  “lumber yard” for wildlife. The birds sing incessantly. A little flock of goldfinches has been visiting the feeders in recent weeks, their plumage all shades of muted yellow and olive. I hear their reedy song while I work. But this morning a neighbor’s incessantly droning leaf blower, that I had to put up with for well over an hour, drowns out the sweet sounds of spring. I disturb a bee with my rake and I gingerly replace the leaf litter. I wonder how many bees and other critters are being more rudely and inadvertently driven out from their winter hiding by the gas-guzzling machine over the road from me. I rake and clear just enough so as not to smother and destroy emerging fauna and plants. The Nest Depot at the back edge of my property is now overstocked with building material and organic matter left in place feeds the soil. 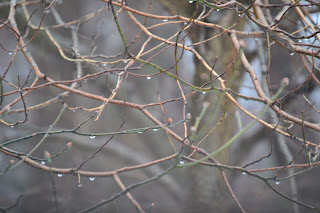 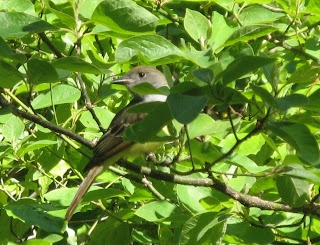 A chattering, a cackle, a plague 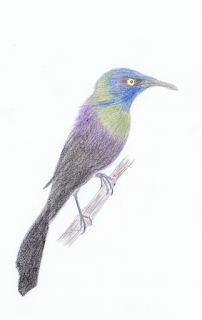 For a few weeks in late October, at different times of the day, a raucous cacophony compels me to go outside to view an autumnal spectacle. I am in awe of this sight! A large flock of common grackles descends on the garden. Hundreds of the birds are paddling in the pool cover, picking through leaf litter, rummaging in the gutters, and perching in noisy numbers in the tall oak trees. Their rasping, scratchy, squeaky sound is quite deafening for all of ten minutes. And then, the squawking stops as some leader or a combined intelligence summons the flock to take flight. There is a perceptible whoosh, almost a roar, as a multitude of wings beats together and the birds fly past me to another location. The sun glints from an iridescence on feathers and these powerful fliers swoop with great speed through the canopy.

The collective name for a flock of grackles is a chattering, a cackle or a plague. “A big velvet wave” is another apt description that I have read. I imagine thousands of black feathers made luxurious by a purple, peacock blue, emerald or bronze sheen. Their dark shadows and loud chattering can remind you of Hitchcock’s birds. But I think individually they are rather handsome and have such an air of self-assurance, with an intense golden eye and a jaunty strut. Grackles are gregarious and these garrulous gatherings in the fall are preparation for a southerly migration. It’s safety in numbers as large traveling flocks are more likely to discern danger and find areas for forage. I have witnessed them in early spring as they return from overwintering grounds.  A chattering of black birds in bare branches against a blue spring sky often falls silent. Every bird is still, heads cocked as if listening intently, for a hawk perhaps?

The beak of a grackle is adapted for omnivorous foraging. A sharp ridge or “keel” inside the beak is used to cut through acorn shells like a can-opener and barbs at the back of the tongue prevent live prey from escaping. They wade in water to catch small fish and have been known to steal worms from the mouths of American robins. Many a garden pest, such as caterpillars, grasshoppers, Japanese beetles and house sparrows, are a part of their diet. They benefit by being close to human habitation and will follow a plow to catch soil invertebrates and mice, or will roost near mall parking lots to feast on discarded fast food.

The plague moniker is most probably given by farmers, whose corn crops have been decimated by hosts of grackles, causing millions of dollars worth of damage. On writing this missive I think I have solved the mystery of my denuded Indian corn ornament, which I hang every fall by my front door. For the first time in many years, and coinciding with this season’s numerous cackles of grackles, all three cobs have been pecked clean of kernels. Resourceful birds indeed!
Posted by Sue at 5:39 AM 1 comment: 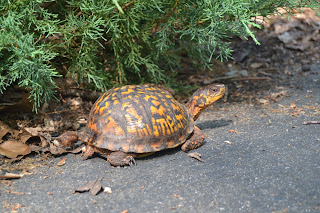 I’m on my way to pick up the mail.
You are parked along the driveway.
Back leg extended, neck craning forward in suspended
animation.
Your amber reptilian eye
fixates on me with an air of defiance.

I know where you are headed.
Across the asphalt
to reach the other side of the road.

But would you not be safer here?
Under the juniper hedge,
Sheltered in cool layers of leaf litter.

You know better.
Instincts intact, you stand dead still.
Wait for me to go,
quite unperturbed. I take in the beauty
of your embossed shell.

Will your sharp claws propel you
to the other side
in your own sweet time? 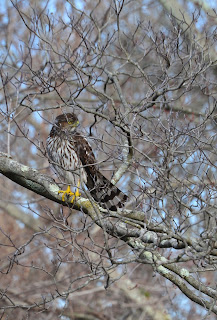 A sharp-shinned hawk has been visiting my garden lately. It is a young bird, quite at home, sitting for quite long periods of time in full view from the kitchen window. This photo was taken when it was sitting on the dogwood tree, which is just yards from the house.  The bird was pulling its beak along tail and wing feathers, preening and altogether having a thorough clean up. Had it just eaten some prey? The yard was eerily silent but every now and again the hawk would swivel its head to observe some tiny motion or sound with its intense hawk eyes. Eventually, some bold chickadees ventured to the bird feeder. I gingerly opened the back door, but before I could aim my camera the hawk had vanished.
Posted by Sue at 7:33 AM 1 comment: